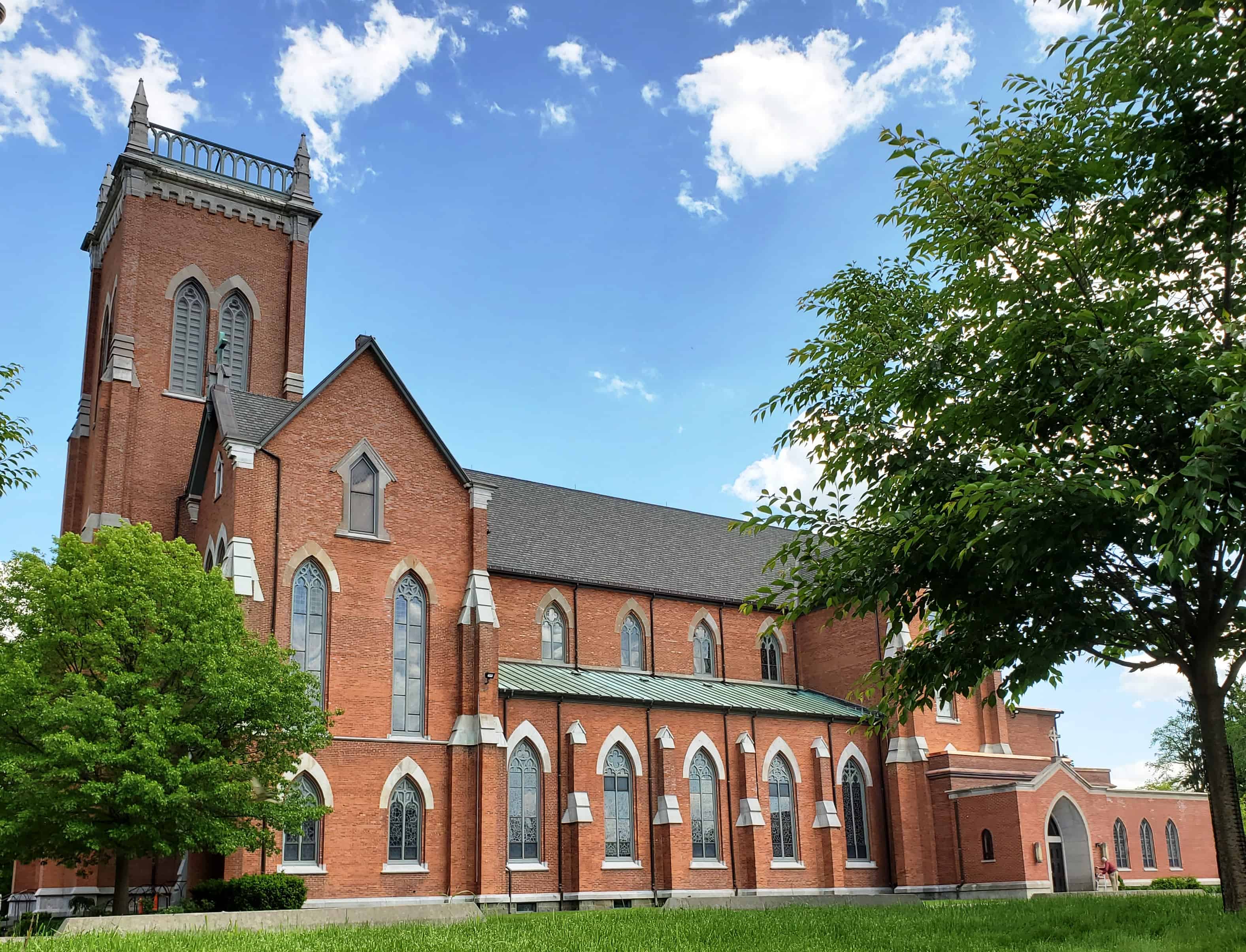 Prior to 1838, Catholics in Binghamton only saw circuit riding priests when their schedules brought them to the area. However, in 1838 Bishop John Hughes of New York dedicated the first permanent Catholic Church to St. John the Apostle and subsequently was formally made a parish under the guidance of Rev. Andrew Doyle on October 24th 1843 who was quickly followed by Rev. Sheridan. In 1847 Rev. James Hourigan became the third resident pastor who served with honor and distinction for nearly half a century. 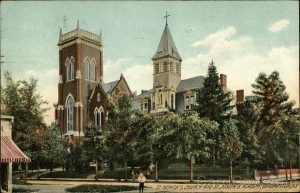 The current church was built during his tenure and dedicated to St. Patrick on September 3rd 1873. The red brick and limestone gothic structure was designed by prominent architect Isaac Perry and executed by contractor Stuart Wells. Rev. Hourigan, a man of vision, also established a parochial school, a boarding school for girls, an orphanage and the cemetery on Riverside Drive. After his death in 1892 his nephew, Rev. Nicholas J. Quinn, became interim administrator until the appointment of the Successor Pastor the Rev. John McDonald in 1893.  Over the generations, St. Patrick’s has undergone renovation and redecoration with significant additions during Rev. Ambrose Dwyer’s tenure including expansion of the sanctuary and sacristy and the addition of marble altars, marble aisles, marble altar rails and pulpit as well as additional stained glass windows and a magnificent organ; All of this during the great depression.  Rev. Dwyer was followed by Rev. Sheehan who worked to reduce the parish debt.  Rev. Msgr. Curtain then served next and worked to erecting Catholic Central High School in the 1940’s.

In 1963, Rev. Frank Harrison became Pastor as well as a Monsignor and devoted much of his attention to renovating existing parish properties, the first major repair in 35 years.  Msgr. Harrison was elevated to Titular Bishop of Aquae in Numidia in 1971 and made Auxiliary Bishop of the Diocese of Syracuse, he remained pastor until becoming Bishop of Syracuse in 1974.  Succeeding Bishop Harrison was the Rev. Thomas Doran who then also became a Monsignor who was followed by Rev. James Fallon who established the Divine Mercy Perpetual Adoration Chapel. After Rev. Fallon’s departure Rev. David Pichette and Msgr. Robert Davern served as Administrators until Rev. James Quinn was appointed as the twelfth resident Pastor of St. Patrick’s who served briefly as he was to devote fulltime energy to Seton Catholic Central. Msgr. Peter Owens then served as Pastor until appointment of Rev. Laurence Lord who served until his retirement. Rev. Charles Opondo-Owora served as interim until Rev. Booth served as Pastor until he died.

Rev. Msgr. John Putano has served as Pastor since 2009, as well as the Episcopal Vicar of the Southern Region of the Diocese.  For over 180 years, St. Patrick’s has been an icon of the Westside exemplifying the beauty of a gothic cathedral as well as its Irish heritage.

* Rt. Rev. Msgr. Francis J. Harrison was elevated to Titular Bishop of Aquae in Numidia in 1971 and made Auxiliary Bishop of the Diocese of Syracuse, he remained pastor until becoming Bishop of Syracuse in 1974.

A timeless expression of man’s devotion to God

“A preacher once said, ‘Man’s thoughts of his God have never yet found fitting expression.’ No doubt the statement  is true, but to the thoughtful observer of the interior of Saint Patrick’s, and especially to one who examines the details, there comes the thought that man has exhausted his finite powers to express his love and devotion to his Creator.

“The whole interior of the ‘renewed’ church impresses the observer with solidarity, and why not? Artisans across the sea have delved into the bowels of the earth in the ancient and well-known Cararra quarries, to obtain the material for the polished slabs, the decorative panels, and the artistic statues which produce this impression. Approximately one hundred fifty tons of Italian marble have been built in the new Saint Patrick’s. Its marble aisles lead to a marble sanctuary, a fitting setting for its three magnificent marble altars. Just within the beautifully carved Cararra altar rail, to the extreme right and left of the sanctuary, are the Shrine of Saint Patrick and of the Sacred Heart, the creamy white of the statuary marble standing out in strong contrast to the decoration of the niche in which it stands. The Munich windows and the rich mural decorations of the sanctuary supply just enough color to give the rich but dainty effect which results.

“The ceiling and side walls of the church and vestibule are finished in Caen stone effect in three tones, with ribs and groined arches of limestone supported by highly polished pillars of Bottecino marbles. These light shades together with the light grey of the Sienna marble wainscoting are in strong contrast with the wrought iron and bronze lanterns with their amber light and the harmonizing but still darker pews.

“Words are a poor medium to convey to the reader a picture of the beauty of our new Saint Patrick’s. Moreover, the attempt would be incomplete without a mention of the new organ, which adds so much to the ‘fitting expression’ of our love for God. To fully appreciate the new Saint Patrick’s you most both see and hear and you will exclaim with the psalmist:

“‘I have loved, O Lord, the beauty of Thy house, and the place where Thy glory dwelleth.’”

The windows of St. Patrick’s have always been admired not only because of their great beauty but also because of the stories they tell. Most of the windows were crafted by the firm of Franz Mayer & Co., in Munich, Germany. This company, which is also designated at the Pontifical Institute of Christian Art was founded in 1848. Over time, the sets of windows that grace our church were installed, first in 1873, others in 1911, and the last in 1929.

These stained glass windows were created to give glory and honor to God. The parishioners who scrimped and saved to bring these works of art to our church are to be remembered for their contribution. The magnificence of suffused color enhances our spiritual contemplation and worship. Those who attend St. Patrick’s Church are fortunate to have such beauty to surround them as they come together to pray and celebrate their Faith.

The four oldest windows depicting St. Dominic, St. Patrick, St. Peter, and St. Paul are not placed where they would be readily noticed. St. Dominic with the rosary is above the east portal and St. Patrick is above the west portal. Ss. Peter and Paul are high in the sanctuary on the right and left.These four windows date back to 1973 and are considered among the oldest in Broome County.

Beginning with the large window over the high altar we can see twenty-seven detailed figures. This three-light window was installed in 19129 during the pastorate of the Rev. Ambrose Dwyer. The title, Christ in Glory, depicts Christ, seated on a rainbow, enjoying the communion of saints. With Christ are the Blessed Mother on His left and St. Joseph on His right. Behind Mary is St. Bridget and behind Joseph is St. Patrick, both of whom are the patron saints of Ireland. It is interesting to note that there are shamrocks in Patrick’s crosier. Three small angels are hovering at the feet of Christ.

The lower third of this window shows various saints, evangelists, and fathers of the Church. Included in this retinue are St. Peter on the far left holding his key, St. Paul on the far right holding his sword, and St. Ambrose next to an elaborate beehive.

The upper third of the window has as its focal point the six-pointed Star of David. This is in recognition of our Judeo-Christian heritage. The dove inside this star may encourage and and promote peace among all people on earth.

The rose windows above the altars of St. Mary & St. Joseph were installed in 1929. Rose windows are hallmarks of St. Patrick’s Gothic architecture and are found in the great cathedrals of Europe, like Notre Dame and Milan. These perfect jewel-like windows are imbued with the deepest and richest of tones to reflect a kaleidoscope of colors unmatched anywhere.

The ten large windows we see that flank the nave of our church were installed between 1911 and 1914, during the pastorate of Monsignor John McLoghlin. These windows alternate between the life of Christ and the life of Patrick, our patron saint. Two windows are now out of view; in the new confessionals one can see The Prodigal Son and Jesus in the Temple.

The first window, nearest St. Mary’s Altar, is The Annunciation. Here the Angel Gabriel appears to Mary who is kneeling at her prie dieu, woman of vision and understanding, model of trust, says “yes” to God.

The second window, Patrick’s Dream, shows our patron as a young man hearing in a dream the call of the Irish people to be their apostle. As a boy he has been kidnapped from his home on the Western shore of Britain and sold as a slave in Ireland. There God called on the foreign swineherd and provided a miraculous escape so he could later return to save the people who enslaved him. After a dangerous trip back to his home, Patrick prepared to answer God’s call by studying for the priesthood.

Scene three, The Nativity, shows the Birth of Christ. This window features an elaborate stable and two triangular compositions; in the one light, three shepherds with their sheep and in the other light, the Holy Family: Joseph, Mary, and the Christ Child.

In the next window we see Patrick’s Arrival in Ireland. Here the saint is arriving by boat with a large retinue to embark on his evangelical pilgrimage. His life was fraught with danger as he crisscrossed Ireland during the middle of the fifth century. It is interesting to note the presence of the round tower in the scene.

The last large window on the east side of the nave is The Presentation. Here, according to the Law of Moses, Mary & Joseph brought Jesus to Jerusalem to present Him to the Lord. The scene shows His Mother kneeling while Joseph is offering a sacrifice of two young pigeons at the temple.

The first window, nearest St. Joseph’s Altar, depicts the Death of St. Patrick, in which our patron is surrounded by angels who have come to escort him home.

The figure of Christ dominates the next window in The Ascension. Here the ascended Christ is shown with eleven apostles at his feet.

In the third window, Patrick Baptizes an Irish King. Through Patrick’s efforts many Irish kings became Christians, inspiring their subjects to follow in the Faith. Many churches were founded by the saint and over 12,000 people were baptized by him.

The story of The Resurrection is told in the fourth window. Here Christ, resplendent in a white robe, has arisen with a glorious angel at his side. The soldiers flanking the sides of His tomb are depicted as being half-asleep and unaware of the miracle in their midst.

The final window on the west side of the nave shows Patrick Preaching at the Royal Court. Here, our patron uses the shamrock to illustrate the mystery of the Trinity to the high king Laegaire (Leary) at the royal court of Tara.  The intensity of the green in Patrick’s shamrock, the shamrocks in his crosier, and the round tower are notable.

These windows soar above the nave windows and through each two-light window streams illumination into the clerestory. In each light, a different saint is depicted. The saints were chosen from among the Apostles and the Doctors of the Church. From the east side beginning at the sanctuary to the vestibule are: St. Simon, St. Bartholomew, St. James Minor, St. John, St. Andrew, St. Peter, St. Athanasium, St. John Chrysostom, St. Augustine, and St. Jerome. On the west side, from the vestibule to the sanctuary are: St. Thaddeus, St. Matthew, St. Gregory, St. Ambrose, St. Gregory Nazianzen. St. Basil, St. James Major, St. Paul, St. Phillip, and St. Thomas.