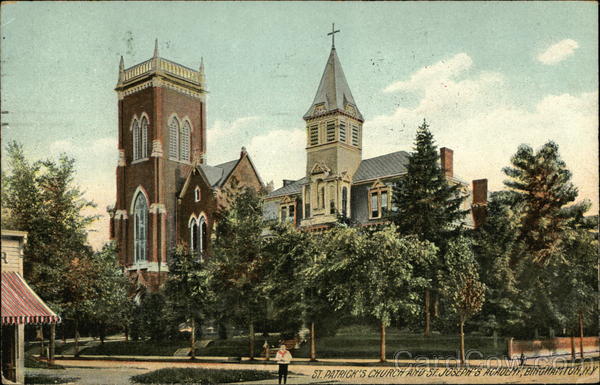 St. Patrick’s Church in Binghamton stands on the grounds of the oldest catholic church in Broome County.

St. John’s as it was called prior was built in 1837, due to a growing number of Irish immigrants the church was becoming too small.

According to church historian Kathleen Reynolds in the 1850s an Irish priest came to Binghamton and decided to build a bigger church for his beloved Irish people. He then hired Issac Perry who came from New York City and built this beautiful church in a Neo-Gothic style dedicated to the patron Saint Patrick.

The saint is beloved by the Irish people as they have prayers and hymns in his honor.

“We celebrate St. Patrick’s Day to celebrate all of the wonderful things Irish-Americans have done. It isn’t just celebrated here in america though, its celebrated all over the world where there are Irish people. St. Patrick’s day in Dublin is something to behold and so is the celebration in New York City, and we have a parade here in Binghamton which is wonderful.” said Kathleen Reynolds the church historian at St. Patrick’s Church.