Prior to 1838, Catholics in Binghamton only saw circuit riding priests when their schedules brought them to the area. However, in 1838 Bishop John Hughes of New York dedicated the first permanent Catholic Church to St. John the Apostle and subsequently was formally made a parish under the guidance of Rev. Andrew Doyle on October 24th 1843 who was quickly followed by Rev. Sheridan. In 1847 Rev. James Hourigan became the third resident pastor who served with honor and distinction for nearly half a century. The current church was built during his tenure and dedicated to St. Patrick on September 3rd 1873. The red brick and limestone gothic structure was designed by prominent architect Isaac Perry and executed by contractor Stuart Wells. Rev. Hourigan, a man of vision, also established a parochial school, a boarding school for girls, an orphanage and the cemetery on Riverside Drive. After his death in 1892 his nephew, Rev. Nicholas J. Quinn, became interim administrator until the appointment of the Successor Pastor the Rev. John McDonald in 1893. Over the generations St. Patrick’s has undergone renovation and redecoration with significant additions during Rev. Ambrose Dwyer’s tenure including expansion of the sanctuary and sacristy and the addition of marble altars, marble aisles, marble altar rails and pulpit as well as additional stained glass windows and a magnificent organ; All of this during the great depression.  Rev. Dwyer was followed by Rev. Sheehan who worked to reduce the parish debt. Rev. Msgr. Curtain then served next and worked to erecting Catholic Central High School in the 1940’s. In 1963 Rev. Frank Harrison became Pastor as well as a Monsignor and devoted much of his attention to renovating existing parish properties, the first major repair in 35 years. Succeeding Bishop Harrison was the Rev. Thomas Doran who then also became a Monsignor who was followed by Rev. James Fallon who initiated perpetual adoration. After Rev. Fallon’s departure Rev. David Pichette and Msgr. Robert Davern served as Administrators until Rev. James Quinn was appointed as the twelfth resident Pastor of St. Patrick’s who served briefly as he was to devote fulltime energy to Seton Catholic Central. Msgr. Peter Owens then served as Pastor until appointment of Rev. Laurence Lord who served until his retirement. Rev. Charles Opondo-Owora served as interim until Rev. Booth served as Pastor until he died. Rev. Msgr. John Putano has since served as Pastor. Throughout the generations St. Patrick’s has been an icon of Binghamton’s Westside exemplifying the beauty of a traditional  Catholic Church as well as its parishioners’ heritage. 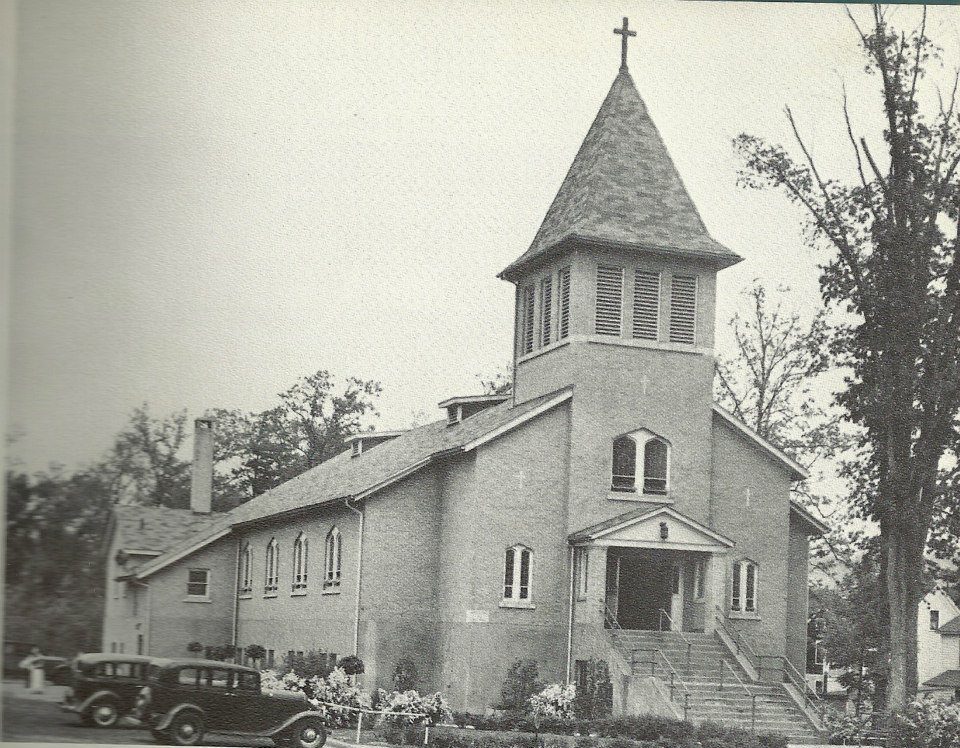 The new parish was guided by Father Thomas J. Hannon who was born in Westport, County Mayo, Ireland who was appointed pastor of St. Thomas Aquinas Church on July 5, 1927.  The church was incorporated on July 28, 1927.

Father acquired a house located at 10 Bellevue Ave. which served as the first rectory and temporary church.  The first Mass was offered there on August 7, 1927.  Holy Communion was received by the first class at this location on April 8, 1928. The parish was beginning to grow larger and Sunday Mass was offered in the Suburban Theatre, near the corner of Main St and Glenwood Ave from June 17, 1928 to December 30, 1929.

The first vocation to the priesthood from St. Thomas Aquinas was Paul T. LeStrange who was ordained June 7, 1941.  Ironically the last vocation from the parish was Father Paul’s nephew,  Gregory C. LeStrange,  who was ordained May 15, 1982. Sister Elizabeth Thomas C.S.J., the former Marion Cullen, was the first woman to become a nun from the parish. Through the years twelve young men and nine young women were among the vocations from St. Thomas Aquinas parish.  Bishop Walter A. Forey praised Father Hannon for his zealous work with the young people of the parish.  Father Hannon often had outings for the parishioners as well as showed movies in the basement hall of the original church.

On May 25, 1930, the first church was completed and dedicated despite the difficult depression years.  The church had a full kitchen to serve the hall, stage, basketball court and a movie projection room.

Father Hannon’s second dream became a reality on December 15, 1950 when the new parish rectory was completed with accommodations for five priests.  Three years later, on August 30, 1953, a new convent was completed and blessed just four days after the Missionary Franciscan Sisters of the Immaculate Conception arrived.  Father welcomed the sisters offering the first Mass in their chapel on August 27, 1953.  Two weeks to the day of their arrival the sisters opened the first kindergarten class enrolling twenty boys and twenty girls.  Grades one and two were added in years following, and on September 5, 1956 a new modern school building was opened.  On September 9th the new school was blessed and the cornerstone placed.  The school thrived for over fifty years with many of those years having over 400 students enrolled.

Our Lady of Lourdes Hospital located at 169 Riverside Drive was started on August 15, 1925 in the Corbett Mansion and land once owned by the parish.

On April 16, 1960, Father Hannon was elevated to the rank of Monsignor and on May 15 of that year celebrated his Golden Jubilee of his ordination to the priesthood.

On January 12, 1965, Father Lawrence J. Sheehan was appointed the second pastor of St. Thomas Aquinas Church continuing the work of Monsignor Hannon. On September 20, 1966, ground was broken for a new church.  This was a changing time following Vatican II and a new circular church was designed, to reflect the new liturgical tastes following the Second Vatican Council, a dramatic departure from traditional churches. The new church was dedicated on December 16, 1967. It conformed closely to the new liturgical changes in the Mass.  People were more intimately associated with the altar of sacrifice being seated no more than 72 feet away with the choir as part of the congregation rather than in a loft.  The church included a chapel for daily Mass and a nursery where young parents could have small children looked after by girls of the parish. On December 16, 1967 the first Mass and dedication took place.

Father Sheehan, in years to come, became Monsignor Sheehan.  He was often seen visiting Holy Name Society members working the weekly Friday night bingo game and the Saturday morning basketball program.   When he left the gym he always took his shot at the basket from the corner.  Monsignor rearranged classrooms in the school creating a larger cafeteria and a second floor library.  He maintained the original church by creating several classrooms in the nave and sanctuary for Catechetical instructions.  Monsignor retired in July of 1974.

In July of 1974, our third pastor, Father John Mulranen came to lead the parish.  During Father’s time here he celebrated his Twenty Fifth Anniversary as a Priest.  There was a reception for him in the gym and each of the parish organizations put on a skit at the event.

Father Mulranen served as pastor until the mid 1990s when he retired.

Father James Tormey became the fourth pastor of our church.  The inside of the church was repainted and more updates were done to the sanctuary.  Flower containers were added along with railings to aid some of our older clergy helping with Masses.  Our school consolidated more during this time becoming a Kindergarten to third grade.  The parish picnic became an Octoberfest fundraiser and ran for several years.

Father Tormey served two six year terms and was replaced with an Administrator Father Charles Oponda-Owora until in 2007 our fifth pastor,  Fr. John Booth, was named pastor of both St. Thomas Aquinas and St. Patrick’s and served as Pastor of the now linked communities until his passing.

Our Sixth Pastor Father John Putano took the helm in 2010 and is our current Pastor.  Not long after Father started in his new position he too was made a Monsignor. Monsignor has led the way with many new improvements to the Parish campus.  The original Baptistery was converted to a meeting room, known as the Cebula Room along with many updates to enhance the accessibility of the campus. The Church Sanctuary has been updated including the addition of a life size cricifix in the sanctuary and a stained glass piece of the Holy Spirit located above the altar, in the dome.  A new choir area was added along with a new state of the art sound system and video streaming capabilities.  Sunday Mass is now streamed live.

Through the years the family of St. Thomas Aquinas Parish has seen many changes but have also remined strong in their dedication to faith and family.